A schoolgirl’s anti-litter message is travelling far and wide this summer on the side of a council bin wagon.

The team at South Lakeland District Council’s (SLDC) depot were so impressed by Ava Mitchell’s artwork, they decided to surprise the nine-year-old by having a huge version made to decorate one of their fleet. 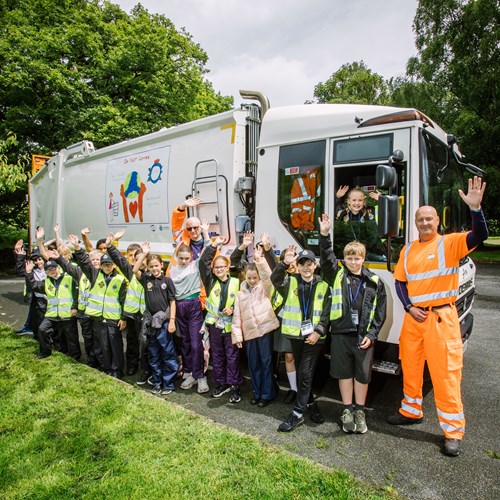 Everyone except Ava was in on the secret when the 26-tonne vehicle turned up in Windermere for a surprise visit, driven by SLDC Street Scene Team Leader Craig Booth. Sharing Ava’s excitement were classmates from St Martin and St Mary CE Primary School as well as pupils from St Cuthbert’s Catholic Primary School, both in Windermere.

Earlier this year the youngsters had taken part in a competition to design an anti-litter sign for Queen’s Park in Windermere, which is owned by SLDC. The competition was run by Police Community Support Officer Sarah Blacow as part of the Windermere Mini Police children’s project, and Ava’s colourful, felt-tipped picture won first prize.

Not only has Ava’s artwork been turned into signs for the popular park, known as “The Rec”, its message will now be seen by thousands more people every week as it completes its rounds in Windermere, Ambleside, Grasmere and Troutbeck Bridge.

As the icing on the cake, Ava has also been given the rare honour of having her local bin wagon named after her.

Councillor Eamonn Hennessy, SLDC’s portfolio holder for Customer and Locality Services, said: “Congratulations to Ava on her brilliant design. It’s easy to see why our depot team wanted to give it pride of place on one of our fleet. Ava has come up with a really positive message about the world being everyone’s home, and her family and school must be very proud of her.

“Everywhere I go in South Lakeland, I am so impressed by the enthusiasm of young people. They take such pride in their community and they care deeply about our planet’s future. Let’s hope that everyone who sees Ava’s bin wagon will be inspired by her brilliant example.”

Matthew Towe, head teacher of St Martin and St Mary CE Primary School, added: “It was a delight to see Ava’s face when she saw her winning design on the bin wagon and her name on the front. Children really are invested in the future of our planet and understand what adults need to do to make things better. Ava’s mobile reminder will hopefully make a difference across South Lakeland.

"The Mini Police project is all about helping children understand that if we behave in a civically minded manner we can make a difference where we live. Thank you to all at SLDC and to our brilliant PCSO, Sarah Blacow.”