Football teams are backing a council initiative to protect players from the hidden danger of dog fouling on pitches.

Players, officials and parents – many of whom are dog owners themselves – have welcomed the new signs put up by South Lakeland District Council (SLDC) excluding dogs from council-owned sports pitches. 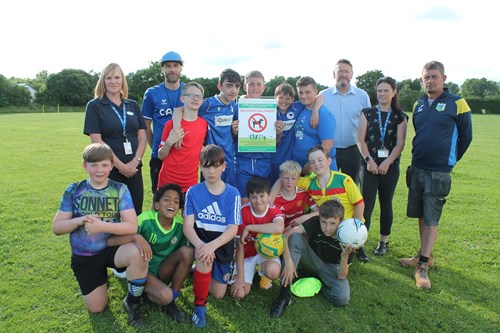 The move follows the introduction of new Public Space Protection Orders (PSPOs) in October 2021 following a public consultation by the council. Under these orders, dogs are excluded from council-owned playing fields and play areas across South Lakeland. Anyone found breaching the order can be fined £100 on the spot or up to £1,000 if taken to court.

Westmorland FA, local football’s governing body for around 140 teams from under-sevens upwards, has welcomed the new dog control measures that are now in place at locations such as Kendal’s Wattsfield, Dean Gibson and Jubilee Fields. They are urging all dog owners and walkers to abide by the new signs to help protect players of all ages from the downright unpleasantness and associated health risks posed by dog fouling on pitches.

James Pattison, Football Development Officer at Westmorland FA, who also plays for Kendal United FC, said: “This is a really positive step. The council has listened to Westmorland FA and the local clubs and valued what we had to say, and now this change is being implemented.

“It’s been quite common for managers turning up on training days and match days to find dog mess on the pitch either before the game or even during the game. We’ve had incidents where players have fallen in it, stepped in it or got it on their hands.

“It’s an added stress for teams having to check the full pitch and it can be difficult – you could go over the pitch a hundred times and still miss it.”

Mr Pattison said the new signs will make a positive difference to players’ safety. “I know there are dog owners who will say, we’ve always brought our dog down here, this is our routine, but that’s natural when you make a change like this. I think most people are respectful of this kind of thing and will listen.”

Councillor Eamonn Hennessy, SLDC Portfolio Holder for Customer and Locality Services, said: “Footballers of all ages should be able to enjoy their sport without being exposed to the serious health risks posed by dog mess.

“We know that the majority of dog owners act responsibly and clean up after their pet but the behaviour of a small number of owners has been putting players’ health at risk. I’m very pleased that we have been able to take action on this issue, which has been such a concern to club officials, players and parents.

“Excluding dogs from our council-owned playing fields is the best way to keep players safe. Anyone found ignoring the new signs can be fined £100 on the spot by council officers or police, or up to £1,000 if it goes to court (except assistance dog owners). I would also encourage any members of the public who see dog fouling to report it via our website at: www.southlakeland.gov.uk

“Our preferred approach is always to encourage responsible behaviour rather than handing out fixed penalty notices. I hope the strong message sent out by these new signs will be heeded by all dog owners and give much-needed peace of mind to our fantastic local football teams.”

Maps and full details of locations can be found at: southlakeland.gov.uk